Audio Book for The Tagger Herd

ALL PHOTOGRAPHS ON THIS WEBSITE WERE TAKEN AND ARE PROPERTY OF THE AUTHOR, GINI ROBERGE

Listen to the 1st five minutes of the book and then order by clicking the above button.

Click here to go to Amazon.com and read the beginning of each book.

​You three don’t get lost,” Grayson teased with a grin. Their first morning of roundup was dark and the only way they could see him was from the interior light of the truck.

Reilly, Wade, and Alex stepped up into the saddle of Rufio, Dollar, and Snickers.

“We won’t,” Reilly laughed. “We’ve been on this ride before.”

“But not in the dark.” Grayson said in a serious tone.

“It’ll only be dark for another twenty minutes or so,” Wade argued.

“And we’ll have the best view in the mountains for the sunrise.” Reilly reminded him.

“Rider’s Point will be to your left. This time of year the sunrise should be right over the top of it. Take a moment to enjoy it.” Grayson said. “Then go down the mountain about half way and you’ll run into the trail that takes you west. Follow it for three ridges.  Josey said she thought she saw a few pairs down there.”

“Once we hit the creek we move back up the mountain,” Wade nodded.

“Then we cross the road into the trees and ride to Willow Ridge.” Alex added.

“We should meet up with all of you once we go down the north face of it.” Reilly continued.

“We have the radio so we can make contact when we hit the road and let you know we’re headed your way in case you want us to do something else.” Wade smiled and held up the radio.

“We tested it this morning before leaving the ranch,” Alex said.

“We got this, Grayson.” Reilly said confidently.

Grayson grinned, “We’ll see you for lunch.” The truck and horse trailer moved down the dark road leaving the three riders on the edge of the dirt road.

“Wow,” Alex whispered. “It is really dark out here.”

“The clouds are covering the moon. You scared?” Wade asked.

“Stay between the two of us and pay attention to Snickers.” Reilly said as he looked around.  He could barely see anything but the dark night. “As long as the horses are calm, we’re all good.”

Reilly pulled his cowboy hat down lower and adjusted his wild rag scarf.  His coat covered his body down past his knees.  He was warm in the brisk April mountain air.  Rufio stood quietly under him but his head was high and he was looking out into the darkness.

“We’ll wait right here until the sun comes up enough we can see,” Reilly told them.

“Just remember,” Wade said. “The Trio have been riding this trail for over twenty years and they are all still alive.”

“You think they would have told us if they had seen a cougar or bear?” Alex asked.

“I can guarantee if Grayson thought there would be any problems, he wouldn’t have left us here in the dark.”  Reilly said.

“There’s the sunrise over there,” Wade pointed to their left.

There was just a hint of daylight appearing over the mountains.

“It’ll be a few minutes before we actually see the sun.”  Reilly said. “Then it will be light enough to head out,”

The sun tipped over the horizon lighting the mountains.  They nudged the horses into a walk across a small field then began to make their way down into the ravine.

A pink hue highlighted the low hanging clouds.  A mountain peak appeared in the middle of the rising yellow sun.

“That’s Rider’s Peak,” Wade whispered. “My grandparents and great-grandparents’ ashes were spread over the tallest peak so they could watch over all of us.”

They sat quietly on the horses and watched the clouds turn a deep pink and the sun fully rise behind the peak.

The top of the mountain side was fully lit when they began their descent. As the sun rose higher into the sky, the light moved down to take over the shadows in the ravine.

“There it is,” Reilly turned Rufio toward the dark trail cut into the side of the mountain.

“What’s that?” Alex leaned forward in the saddle to peer into the trees ahead of them.

There was a large dark mass in the middle of the trail just before the shadows of the trees.

“But I don’t see any others.” Reilly said as they drew closer to the cow.

The black cow’s head turned toward them.  She tucked her front legs under her chest and rose just inches.  She rocked back and forth to lift the rest of her body but nothing happened.  After three tries she lowered back to the ground with a groan.

“Something’s wrong with her.”  Reilly said as he stepped out of the saddle.

Alex and Wade joined him on the ground and they slowly walked toward the cow so they didn’t scare her.

“What?” Reilly and Wade asked in unison.

Reilly handed Alex his reins and slowly stepped to the cow but she didn’t seem to care. He could easily see the brand was only a TE.

“Is that Martha?” Wade asked in surprise.  “Does she have the scar over her right eye from the chutes?”

Reilly looked at the cow’s head as she looked at him and saw the confirming faint scar. “Yeah,” He nodded.

“Who is Martha?” Alex asked.

“One of the last cows from the original herd; before the accident,” Wade said. “She must be close to twenty years old.”

“Or more,” Reilly nodded and stepped back away from her with a frown.

“It’s weird she’s out here all by herself,” Alex said.

Reilly walked farther into the trees.

“What are you doing?” Wade asked.

“Looking to see if she has a baby in here,” Reilly answered but he didn’t see any movement.

Wade walked over to the cow and leaned down to look under her.  “She’s got a pretty full bag but she doesn’t look like she’s in labor.”

Reilly looked across the mountains then back to the cow.  It was still really early, cold out and she was susceptible to predators.

He looked over at Wade and Alex.

“Well, we can’t leave her out here alone.”  Reilly determined.

“I agree,” They answered in unison. 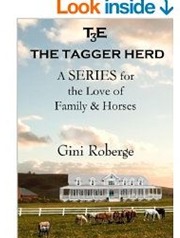